Banarhat Market in the Banarhat -1 Gram Panchayat of Dhupguri Block, Jalpaiguri is a well known place. Higher Secondary School, Bank, Hospitals etc are present in this densely populated area. Banarhat is a small suburban town and as such the market also acts as small-scale business centre for vegetables. As such, this area is frequented by many people for business purposes. A permanent vegetable market, a weekly market (haat) and a daily market has sprung up here due to the local vegetable business. 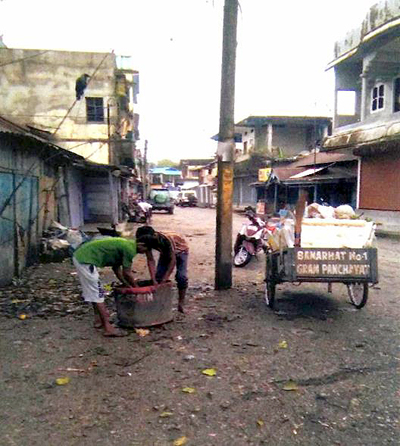 Despite the economic development of this place, the area was not cleaned for a long time due to ownership disputes of the permanent vegetable market. As such, the place was becoming unhealthy and unsuitable for human inhabitation. The Banarhat – 1 Gram Panchayat finally decided to solve the problem meeting the demands of the locals. The Banarhat – 1 Gram Panchayat deliberated with the local business association, volunteer organizations and the local public to find a solution to this problem. Finally, it was decided through consensus that the Gram Panchayat would take up the responsibility of garbage disposal, maintenance and infrastructure development of the market. It was also decided that the local businessmen would pay a service tax to the Gram Panchayat for these services. To this effect, a by-law was also passed by the Gram Panchayat. A local volunteer organization and the business organization held camps to raise awareness of the buyers and sellers of the market. The project commenced with the combined initiative of all stakeholders. 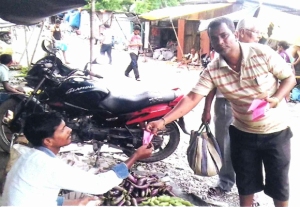 The Gram Panchayat employed a tax collector and 5 scavengers on contract for the said purpose. For this purpose, three wheeled waste removal vehicles were also procured. The project finally commenced on April 1, 2017. The area was completely transformed within a year. There are no signs of the previous pollution. All the buyers and sellers of this market are well aware about conservation of environment. All wastes from the market are now dumped into a covered place – a feat been possible through the awareness campaigns. A vehicle from the municipality collects the garbage each day at a specific time. The Gram Panchayat collects approximately Rs. 30,000/- each month from this initiative. This has increased its own funds which are used as per requirement. The Gram Panchayat has also renovated the concrete drainage system of the market and repaired the culvert and the concrete roads for infrastructure development by utilizing funds from the Central Finance Commission. Construction of two toilets was also included in the Annual Development Plan of the Gram Panchayat in the last financial year and same has been implemented. The creation of toilet has benefitted the local merchants and the buyers. Women coming to the market have been greatly benefitted by this endeavour. The Gram Panchayat has leased these two toilets located at a densely populated area and collects revenues for its own funds. This has also contributed to the overall development of the area. This project illustrates the fact that the general public is not apathetic to paying regular tax for properly planned projects, which provide regular service and are well maintained. The Banarhat – 1 Gram Panchayat has set up an example in the Jalpaiguri district for increasing the revenues of the own funds of the Panchayat.